One of the main issues that inner-city constituents ask me about is what can be done to improve the situation of the city’s homeless. I am very pleased to see that the City Mission have lodged a resource consent application for a dramatically expanded facility on their re-developed site.

136 Hobson Street, Auckland Central. Consent bundle BUN60319224. Overall, a Restricted Discretionary activity. The re-developed building would include a medical centre (including general practitioners, dentists and social workers) and pharmacy, a medical detox facility with 30 beds, 80 residential apartments – 40 of which will be used for permanent housing for ‘chronically homeless’ people and 40 for people on the social housing register. Of the 80 apartments, 70 will be studio apartments and 10 will be one-bedroom. The design has been structurally future-proofed so that an additional accommodation tower could be constructed at the Federal Street end of the site. 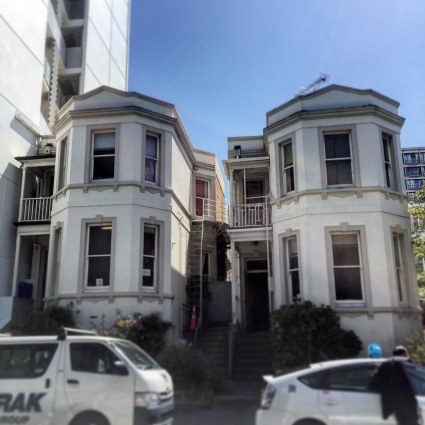 The townhouses at 201-203 Federal Street. To be demolished. (photo credit: Vernon Tava)

A previous approved resource consent for the redevelopment of the site (R/LUC/2008/6866) provided for the demolition of the existing buildings on the site with the exception of the scheduled parts of the Prince of Wales building and the Federal Street ‘halves’ of the two townhouse buildings (pictured, built in 1908) at 201-203 Federal Street. In 2015 consent was obtained to completely demolish the two  Federal Street buildings (R/LUC/2015/3925: reported on in my October 2015 Report to the Local Board). These buildings are not scheduled and are not identified in the Character Overlay. Despite my great personal disappointment in the demolition of these elegant buildings, we were not able to have input into that notification decision as there were no planning grounds on which to do so. I have been informed that they will be used as a night shelter for homeless women until they are demolished.

The Urban Design Assessment by Boffa Miskell concludes that:

‘The high quality building facades in general at all levels of the building and on all elevations that are well-articulated, with high-quality building materials that will result in the building perceived in the round with a desirable sense of depth, texture, variation and relief and an overall distinctive architectural form and character that will become associated with the aspirations and activities of the Auckland City Mission and the social roles the Mission fulfils in Auckland … The built form and massing of the proposal does result in some ‘overs and unders’ in relation to the building envelope controls of the Unitary Plan, but in so doing represents a highly site-specific response to context including the retention of the scheduled heritage building on site, and establishment of quality building frontages to Hobson and Federal Streets of contrasting height and presence appropriate to the differentiated width and streetscape qualities and character of these streets.’

I am particularly concerned about the protection and enhancement of The Prince of Wales Hotel, built in 1882, which is a Category B scheduled building in the Unitary Plan. Early design options considered for the redevelopment included a more comprehensive restoration of the Hobson Street façade of the building, including removal of plaster render and repair or replacement of the timber weatherboard cladding, as well as the reinstatement of ground floor window opening. Due to budget constraints, this option for the façade can no longer be delivered as part of the project. The existing façade is to be retained, made good and repaired.

The heritage assessment is positive and said that [italics added for emphasis]:

‘The proposed retention and ongoing use of the former Prince of Wales hotel as part of the Auckland City Mission development will have a positive effect on the heritage values of the place. The scheduled building, which is currently in a deteriorated condition, will be retained, and repair and maintenance work will enhance its appearance and durability … The proposed new development adjacent has been carefully designed to allow the historic building to be retained and appreciated three dimensionally. By creating a separation to the north and east of the historic building and the upper levels of the new building, the historic building can be read as a separate entity, and there is a transition in scale from the old to the new that reduces the potential dominance of a new taller building adjacent. The detail, form and pattern of the proposed new elevations relates appropriately to the level of detail evident on the historic Italianate façade. The proposal will generally have a positive effect on the heritage values of the place and will support and enhance its ongoing use.’