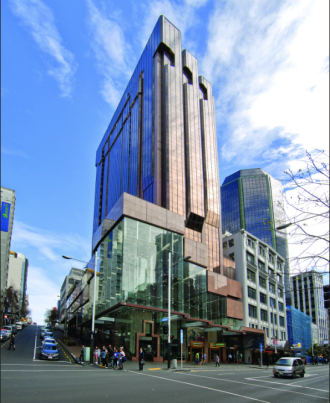 The opening says it all:

The old Fay Richwhite building at the corner of Wyndham and Queen Sts is called The SAP Tower these days.

The name seems strangely appropriate given the easy victory, the current owners, Robert Jones Holdings Ltd (RJH) have scored over Auckland Council in ridding themselves of the in-house public toilets.

RJH took the council planners for a bunch of saps and were not disappointed. The bureaucrats have agreed to the removal of the 24-hour public toilets abutting Wyndham St, and to the closure of the public walkway through the building — both without any public consultation.

Rudman goes on to explain that

[T]he toilet in question was supposed to serve the public for at least 50 years, as part of a deal signed off by Planning Judge David Sheppard on November 24, 1988. By my reckoning, it had another 20 years to go.

Back in the mid-1980s I had great sport following the twists and turns of the erection of this great monument to the excesses of that period. My files tell a rather different story from the one the council is now relying on.

Their prime text seems to be the 1985 resource consent document, which, Ian Smallburn general manager resource consents, tells me “did not go so far as to say that the toilets had to be retained in perpetuity”.

True, but that document was a mere starting point, documenting the bankers’ initial promises to provide public facilities such as a children’s creche, a public swimming pool and tennis courts — none of which eventuated — all to gain several bonus floors of space. The story was in how the details kept changing.

The long-term plan of the developers (Foenus Investments) was to remove the underground public toilets, which they felt lowered the tone of the neighbourhood.

It was two years after the resource consent was issued that Foenus showed its hand with a letter from Bell Gully lawyers to the council requesting it “remove the old public lavatory from the Wyndham St footpath and in return the owner [Foenus] construct a first-class modern male and female public lavatory [“the facility”] in the building with direct access from Wyndham St”.

Council would have to service the facility, pay all the running costs and promise to clean and disinfect it twice a day, and not to sublet it. All heart, the owners would “remit rental on the facility”.

After months of haggling over permanence, in October 1987, I reported that the council had got its way, and the agreement would be good for 50 years.

Further, if the building was pulled down before that, the owners would pay to construct a new public lavatory at the council’s direction. The existing historic toilets were duly demolished.

A year later, as part of a convoluted deal to escape its commitment to provide the creche, Foenus agreed by way of compensation, to enlarge the new ground floor toilets, provide new public toilets and restroom facilities on the eighth floor public plaza, and expand the public pedestrian network through the building.

These details were duly signed off by Judge Sheppard, in a document that can be found online.

I wrote about this resource consent in detail in my November 2017 report to the Waitematā Local Board. I strongly opposed the removal of the toilets and loss of the through-site link but the matter was considered a legal fait accompli. For those of you with an appetite for the planning minutiae of the decision, the relevant excerpt from my report is reproduced below:

151 Queen Street, Auckland Central. Additions and alterations to the existing building including the removal of a through site link and public toilet (TSL from Wyndham Street to Mills Lane)

This application effectively supersedes the historic consent in which a through-site link between Wyndham Street and Mills Lane, and a public toilet on Wyndham Street, were consented. The link will be removed altogether and the toilet will be replaced by a retail store. The bonus floor space that was earned with the previous conditions will be offset instead by the purchase of heritage floor space.

There are examples of past conditions pertaining to the implementation of TSLs being  worded to ensure their implementation but not specifically their retention. Further (within a certain historic period of consenting) it was not required for these links to be registered as a covenant. It is my understanding that this was rectified about 14 years ago and that such conditions are now registered on the title.

In this instance, with regard  to the application LUC60309526, 151 Queen Street, neither the TSL nor the public toilet have been registered on the title and the condition on the original consent only required the TSL and toilet to be implemented in accordance with its approved plans to the satisfaction of the Council. It does not specifically require their retention in perpetuity nor did it require the TSL and toilet to be registered on the title to indicate ongoing provision.

On behalf of the Local Board I raised our strong opposition to the removal of the TSL and public toilet but was informed by the responsible planner that the legal position was clear and their removal would not be sufficient to occasion even notification of the consent.

While the City Centre Master Plan identifies specific TSLs throughout the CBD, this does not include a through site link from Wyndham Street to Mills Lane. In a similar way, the AUP (OP) Map H8.11.9 identifies specific blocks that are able to obtain an additional 0.5:1 Floor Area Ratio (on top of the standard bonus awarded). This means that sites within the CBD can gain extra floor space by providing a TSL within their development, but those specifically identified in the aforementioned map, are able to obtain further additional floor space for the same bonus feature (TSL). This can be interpreted to mean that any existing TSL that is highlighted on this map is of importance and would be expected to remain. The site in question is not identified as such.

The policies in the AUP (OP) are silent on the retention of current public amenities. Nowhere does it stipulate that the removal of bonus features should be avoided, or that their retention is required. However, the AUP (OP) H8.6.18 states that qualification for a bonus requires the TSL to have an access easement registered on the title to which the link applies to ensure preservation of the link and its ongoing maintenance by the owner of the title.

“Encourage public amenities to be provided within developments, including publically accessible open space, works of art and through site links.”

This policy along with the need for a registered easement encourages the provision of a TSL and its continued preservation.

However, in the case of some existing TSL (or other public amenities) like 151 Queen Street, where there is no requirement for an easement to be registered. Policy H8.3(32) does not provide Council with a clear conjecture in the case where it is proposed to remove a TSL.

The public toilet at the Wyndham Street side of the development – which had been closed  for some time by the owners due to ‘anti-social behaviour’ – was removed in the same fashion as the TSL by the superseding application with bonus floor space instead being compensated for by the purchase of heritage floor space.

The Council decision report can be found here: LUC60309526 Report.

UPDATE (4 July 2018): Councillor Chris Darby has sent a letter to Auckland Council Chief Executive, Stephen Town, requesting a review of procedures for consents like these. The letter can be read here. Its essence is captured in the following:

I was surprised to learn that there is no requirement to seek input from [Community Facilities] as a part of the resource consent process. The same applies to legal services and the Auckland Design Office.

It concerns me that Council’s consents process can facilitate the removal of public amenity with no requirement to first assess the need for it.

Council is responsible for delivering community outcomes and an isolated approach, absent of input from other arms of the organisation, will only hinder our ability to achieve this.