A resource consent granted to Rod Duke (CEO of Briscoes) for a helipad above Sentinel Beach in Herne Bay has garnered significant media and public attention but the reporting doesn’t give particularly useful or clear background on the consent itself. This isn’t surprising given the arcane, technical nature of such matters. In the interests of balance, I hope to give a reasonably clear, easy to understand summary here. 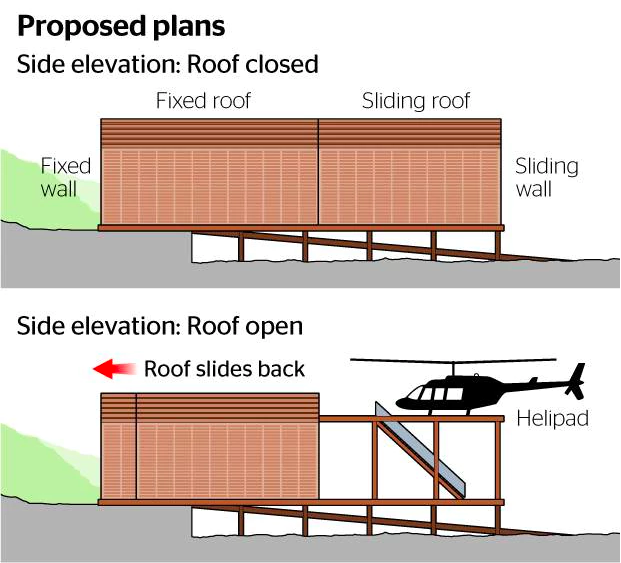 In December 2017, Rod and Patricia Duke appealed their own consent (BUN60302136) for a helipad on their boatshed at their property at 75 Sarsfield Street, Herne Bay to the Environment Court. The application had sought consent for 6 helicopter flights to and from the converted boatshed (12 movements of one take-off and landing per flight), they were granted 3 flights (6 movements). You can read the Council decision report here. On 18 December 2017 the Dukes withdrew their appeal.

The construction of a helicopter take-off and landing site in the general marine area is a non-complying activity under the Unitary Plan. ​The take-off and landing of a helicopter from the site was assessed as a Restricted Discretionary activity under the Unitary Plan as Council assumed it exceeded the permitted activity standard by exceeding a noise level of 50 dBA Ldn. It is important to note here that, from the Council’s perspective, noise is the only adverse effect that could be considered within the RMA framework. Safety and the risk of sand and debris blowing about as a result of rotor wash is in the province of the Civil Aviation Authority (CAA) who have to separately approve the site as a take-off and landing area.

​T​he original application was lodged in August 2016, I noted it in my August 2016 report to the local board as follows:

75 Sarsfield Street, Herne Bay: Reconstruction of existing boatshed and the establishment and use of a helicopter landing pad on the replacement building

R/LUC/2016/3508. The application involves the reconstruction of the existing boatshed and the establishment and use of a helicopter landing pad on the replacement building. The applicant has applied for the noise component of this consent as a permitted activity. The Local Board asked that this application be limited notified to surrounding properties on the basis of noise caused by the helicopter operation. We have also asked for public access along the waterfront to be maximised so that the passage of members of the public along the shoreline is not unreasonably obstructed by the construction.

The ​applicant’s acoustic expert provided an assessment of noise effects, dated July 2016, which states (on page 6-7): “Based on the above and assuming no written approvals have been obtained from the neighbours, a total of three flights (three approaches and three departures) a week with a maximum of one arrival and one departure on any one day will comply with a level of 50dBA Ldn at the most noise sensitive location, which is the neighbour’s foreshore boundary adjacent to the boat shed.  By complying with the 50dBA Ldn at this site the 50 dBA Ldn limit will be complied with at all sites not owned by the applicant”.

Council’s acoustic expert reviewed the applicant acoustic expert’s report, which was based on three flights (three approaches and three departures) a week with a maximum of one arrival and one departure on any one day and further information was sought from the acoustic expert, which he provided in letter form on 14 September 2016.

​After ten months had elapsed, the recommendation report for notification – further to the Local Board’s request for limited notification to surrounding properties – (dated 1 June 2017) recommended that the application be processed on a limited notified basis to 73 and 79 Sarsfield Street. This recommendation report was then shared with the applicant. Council received written approvals from the owners of 73 (also owned by ​the Dukes) and 79 Sarsfield Street on 19 June 2017.

The recommendation report for notification was updated as a result of the written approvals being received from the owners of 73 and 79 Sarsfield Street, and the report (dated 18 August 2017) recommended that the application be processed non-notified. The notification decision was made by a duty commissioner on the 18th of August 2017.

The 18 August 2017 recommendation report for notification states “The Council’s assessment has been based on a maximum of 3 flights (3 arrivals and 3 departures, 6 movements) in any 7-day period with a maximum of one flight in any one day. The applicant has accepted the application proceed on that basis.”

The application in this case was processed non-notified, with the assessment for notification being based on a maximum of 3 flights (3 arrivals and 3 departures) in any 7-day period.  A greater number of flights per week would have required an amended noise assessment and the officer managing this application noted that this ​may have required the application to be notified. Section 104(3)(b) of the RMA provides that​ Council (and the Environment Court on appeal) must not grant a resource consent if the application should have been notified and it was not.

The Dukes have appealed Council’s decision to the Environment Court.  The Council has agreed to Mr Duke commencing with his current consent (under section 116 of the RMA), while the proceedings are before the Environment Court.  The Court issued a decision enabling Mr Duke to commence using his consent, except condition 7 (the landing allocation), which is under appeal.