As riding a bike has become something of a political act and increased funding for cycleways has become a mainstream government position, acclaim for better cycling options has been met in more than equal measure by vitriol. It has been referred to in some quarters as “bikelash” and the criticisms of cycling and cyclists can run from the internally-contradictory to the conspiratorially-crazed.

It is a common refrain among these critics that only drivers of automobiles pay toward the cost of roads. I often hear this when cycleways are discussed and, more troublingly, when there is an accident involving a person on a bike. Some car drivers express anger that people on bikes are somehow ‘not paying their way’ and that they are therefore not entitled to the same courtesy or safety as other users of the road. It is a disturbing thought that a person’s safety should be proportionate to their financial contribution to transport infrastructure. Some suggest that a system of registration or even licensing for bike riders will improve safety or defray the cost of providing cycling options. These arguments lack perspective and are, for the most part, founded in falsehoods.

It is true that users of motor vehicles contribute to the National Land Transport Fund (NLTF), administered by the New Zealand Transport Agency (NZTA), each time they buy fuel, register their vehicle, or pay their road user charges if their vehicle has a diesel engine. About 10% of contributions to the NLTF come from GST and income tax which is paid by everyone. Around 60% of the NLTF is spent on state highways, usable only by motorised transport but still paid for by people who may walk or cycle as their primary modes of transport. 20% of the National Land Transport Programme Expenditure comes from rates which are paid by property owners and also by tenants through their rent. So, roads are actually partly paid for by everyone who pays taxes and rates. More is paid by motor vehicles than bikes but that makes sense when we consider the very significant difference in wear-and-tear on a paved surface between bikes and riders that weigh less than 100kg, cars that weigh between 1 and 2 tonnes and trucks that weigh many times more than that.

The diagram below provides a clear breakdown of the New Zealand system of revenue and expenditure on roads. 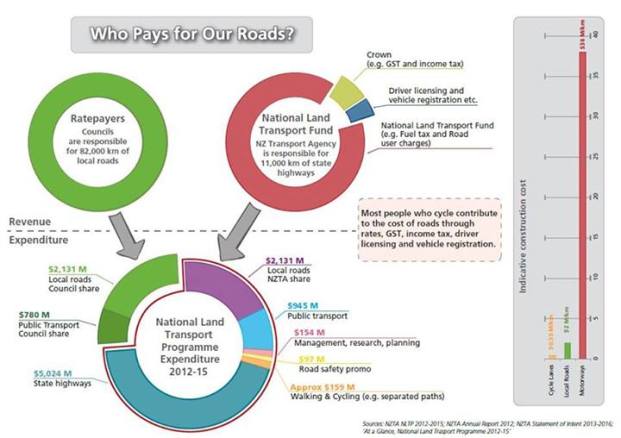 How is that money spent?

The picture is more nuanced when we look at expenditure. Local roads are funded roughly half by the NLTF and half from local council rates and development contributions. Motorways are mostly funded by motor vehicle users but taxpayers also contribute. Local roads are approximately 45% funded by motor vehicle users with the rest from ratepayers. What’s more, where a larger share is paid by users of motorised vehicles it is proportionate to their use of the roads and motorways especially when we consider that a lot of the expenditure is on repairs to roads caused by vehicles’ use of them. Almost half of the NLTF is spent on state highways which are exclusively for the use of motor vehicles.

Of course, many (perhaps most) bike riders also drive and therefore contribute to the cost of roads directly through driver licensing and vehicle registration (more detail in the NZ context here and here). What’s more, roads don’t pay for themselves. Even toll roads have been shown to require subsidy from general taxation and rates to avoid commercial failure.

With the advent of the Urban Cycleways Programme (UCP), another factor has been added to the funding mix. The Programme provides for strategic cycleways to be funded approximately one-third from the NLTF, one-third by the government UCP fund, and one-third by the relevant local authority. Given such a firm financial commitment from the government to support the expansion of cycleways it would be frankly careless of councils not to leverage this investment while paying only one third of the capital cost. In Auckland, for instance, we will see $88.73 million invested between 2015 and mid-2018 with ratepayers contributing just under $32 million. 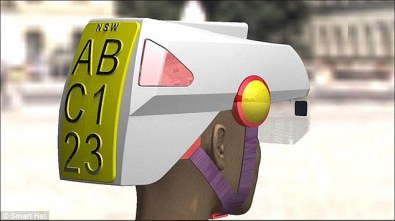 Not a joke: this is a concept recently pitched to a local council in Australia by Sydney-based designer, Tony King

A typical example of the easy but uninformed political points that can be scored in this area are exemplified by the opening pitch of a recent aspirant to Auckland Council. Among a number of regressive transport and land use policies, he announced his intention to halt all future cycle lanes, and remove existing ones where they ‘obstruct traffic’: “A bicycle registration system will be introduced so that future cycle lanes will be built when the fund accumulated from cyclist registrations allows for it.” This seems to see cycleways as being only for the benefit of people who ride bikes and ignores the resultant reduction in congestion which benefits drivers who by necessity or preference stay in their cars. These discussions are often accompanied by the suggestion that bikes should be registered for reasons of safety and crime deterrence. It is hard to take seriously the argument that easily-removed identifiers affixed to a bike will stop traffic offences or theft when we consider how ineffective the same expedient has been when applied to motor vehicles.

Gary Froggatt of the Auckland Tramways Union has gone further to suggest a licencing regime, although this was quickly rejected by the AA and government as an ineffective and unnecessary administrative burden.

A comprehensive rebuttal of cycling registration and/or licensing schemes points out that there are very good reasons to licence motor vehicles, given that they are heavy, fast-moving and come with a strong likelihood of causing serious injury or death in the event of a collision. Bicycles, however, are primarily a risk only to the rider and collisions causing injury to anyone but the rider are very rare. The case against registration or licensing of bikes falls into three broad categories:

Another neat summary is provided here.

These are compelling arguments against licensing and registration of bikes. It is worth noting that any jurisdiction that has done so has either phased out the practice or is about to.

The true costs of driving

There is a far deeper problem with a private car-dominated transport system, such as Auckland’s, than conflicting modes of transport. The externalities of driving (particularly in fossil-fuelled vehicles) are not even close to being adequately priced and raising levies on fuel and/or road usage is widely agreed to be political suicide. Any consideration of an effective price on carbon tilts the balance even further off kilter. The price signals are all wrong and drivers don’t come close to meeting the true costs of driving.  This is well explained in this article, written in the U.S. but entirely analogous to N.Z.

Everyone pays towards the cost of local roads and motorways whether they use them or not, however lightly or heavily they impact upon those roads, and attempts to licence or register cyclists are the very definition of bureaucratic folly. Humans mounted on mechanical frames are inherently more vulnerable than those ensconced in metal containers weighing at least 10 times more; the different types of transport each have their place but they don’t mix very well – particularly when the heavier, faster-moving mode is so privileged in urban design. Far from attempting to discourage and over-regulate those who choose to cycle, we should encourage and incentivise them.