I attended a meeting of the Governing Body on 9 December 2014, about the response to the Auditor-General’s refusal to sign off the LTP (2015-25 Long Term Plan) with the start to the City Rail Link in 2015-6 when the government will not contribute funding until 2020.

The response from Council is to move the date to 2018-19. This is promising. It means that the difference between the government’s and council’s preferred start times will be only 18-24 months apart.

CEO (and acting-CFO), Stephen Town, presented on the fundamentals of the amended proposal. The interest to revenue ratio will not exceed 12%. There will be no impact on rates increases. Council will assume $416 million debt for 18-24 months  but this will have no impact on rates as the government will begin contributions which will cover the debt servicing and part of the principal in 2020. 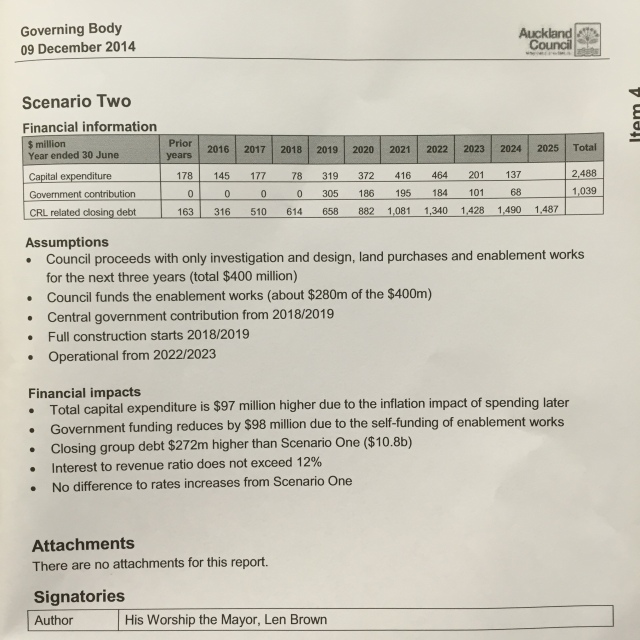 Source: Open Agenda of the Extraordinary Meeting of the Governing Body on 9 December 2014, p. 11

Councillors raised concerns about the fact that the Auditor-General has rejected the 2016 start date. The CEO observed, in answer to prompting from Cr Webster, that it is not at all uncommon for there to be a back-and-forth with the Auditor-General’s office. These are “fluid and dynamic” discussions. This has simply been more public because it is to do with the CRL and is therefore widely reported on.

The government’s targets for employment have been routinely criticised by council and this meeting was no exception. Cr Lee pointed out that although patronage targets are valid and achievable, the employment target for the city centre would only be possible with the CRL operating. An officer noted that the area around Britomart has gone from being something of a blackspot in the city centre to having the highest productivity increase, employment growth and rent increases because of the connectivity of Britomart. It is reasonable to assume that this effect will be replicated where the CRL stations emerge.

The recommendation was accepted 14-6 (Cr Filipaina was absent) and the councillors voted as follows: