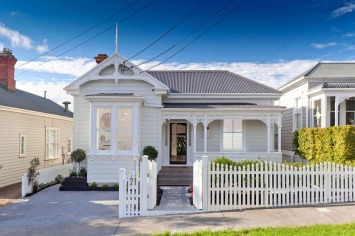 The pre-1944 demolition control was introduced in order to provide a check on the demolition of heritage properties in Auckland. The year 1944 has been chosen as the year from which assessments are based because this was the first year that a comprehensive aerial survey of the Auckland metropolitan area was undertaken, allowing a basis for comparison with successive years.

The control has been one of the main assurances that has been offered to concerned Aucklanders that consents for demolition of heritage buildings will be slowed by the application of a more stringent standard. But, in practice, the operation of the control is such that it will only protect the most exceptional heritage examples.

The test in the Proposed Auckland Unitary Plan is in two parts. Only the first part has been given legal effect:

Upon making enquiries with a senior Council planner in the Resource Consents team, I was told the following:

‘The second aspect of this overlay does not have any legal effect. Section 86B of the RMA only gives immediate legal effect to rules which relate to Historic Heritage, water, air and other significant indigenous vegetation.  As the pre-1944 demolition control is separated into two assessments, the first being heritage related and the second relating to special character, only the first part of the assessment relating to heritage can be given weight under a resource consent application.’

In effect, this means that only buildings that would meet the standard of being eligible to be scheduled as a Heritage A or B building meet the standard; a very high standard indeed. To put this in context, in the Waitematā Local Board area there are currently 89 Heritage A-listed buildings and 275 Heritage B-listed. A recent instance illustrates the stringency of the standard: when a Victorian-era villa was removed from the corner of Allen and Selbourne Streets in Grey Lynn in October 2014, the heritage architect making the assessment justified the removal (supported by Resource Consents) with the following statement:

‘It does not demonstrate any remarkable physical traits that would set it apart as a considerably significant example of the type that would warrant inclusion on the Schedule of Historic Heritage Places.’

So what we have is a protection that only functions to save buildings that would be eligible to be scheduled anyway. Far from satisfactory.