It was one of the highlights of my month to see the O’Connell Street shared space officially re-opened and turned over entirely to people for the night. Paid for by the city centre targeted rate to the tune of $2.25 million, this is not the first shared space in Auckland but it is certainly one of the most beautiful, lined by architectural gems such as Administrator House and The General Building. 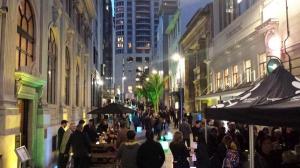 I look forward to seeing Bledisloe Lane and Federal Street launched as shared spaces later this year. Other features of the street include new stone seats containing information on the street’s heritage. There are also special pavers marking the line of the original eastern side where construction teams discovered the foundations of the original properties during the upgrade. 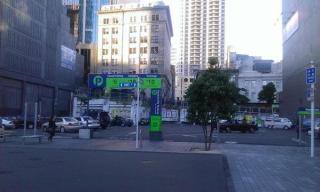 The carpark viewed from Fort Street. O’Connell Street is directly behind the tree.

The street has a strong ‘full-stop’ at the southern end, punctuated by the Metropolis building. The view looking north, however, is less complete. The old Auckland Star building that occupied the facing site on the other side of Shortland Street would have been a beautiful view but it was demolished in 1989, after many years of neglect, for a development that never eventuated. It has been one of Auckland’s post-’87 holes since then, being used as a rather pricey carpark. Earlier this year a consent was granted for a three-storey carparking building with an active frontage on Fort and Shortland Streets. I objected to this use strongly when the Local Board was consulted but the consent was granted. The site is hugely important as it is the punctuation for Commerce Street, right down to the water, as well as for O’Connell Street. We will be advocating for a better use of the site and if a later consent is granted for more height, will strongly recommend that the view to the water be given full consideration along with its built context.